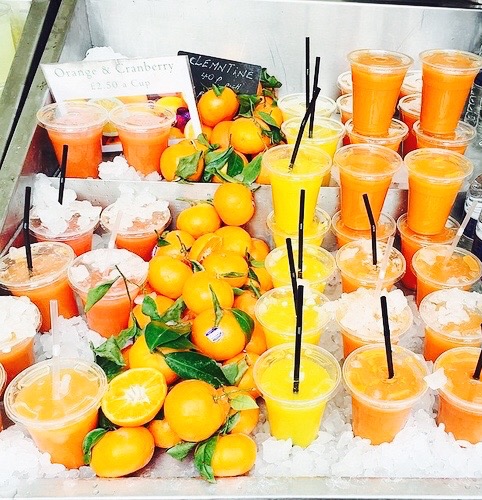 We get it – juice can be expensive, and many people down a whole bottle in less than a minute. So why pay so much for a drink that you think is barely going to fill you? May as well just get it not organic if it’s cheaper, right?

We believe if you are going to juice, do it right. You may think your spending less by avoiding organic juice (even though some companies charge the same for far LESS superior ingredients) but conventional is actually more of a waste of money! This kind of juice may actually do more harm than good…

If your ingredients are not organic, your juice won’t just contain ‘juice’ – there’s also going to be significantly harmful amounts of nasty chemicals, herbicides, pesticides and fertilizers. And it will be a really concentrated amount – juicers filter out fiber, not chemicals. The more non-organic ingredients you juice, the more creepy and inedible junk will end up in your glass and more work for your liver. Juice is super potent and its components enter the bloodstream extremely quickly. Think of drinking petrol mixed with some fruit juice – would you really do that to yourself?

Studies have also shown that organic crops are not only less poisonous, but have more nutritional value! Research has found significantly higher levels of vitamin C, iron, magnesium and phosphorus in organic produce than in conventional produce.

The crops often used for juice are thin skinned, and part of the ‘dirty dozen’ – they are most susceptible to chemical contamination (think apples, carrots, celery, cucumber).

If you’re going to juice – do it right. If money is an issue – do it less, but still do it right! Pesticide residues from conventional produce have been proved to be a direct cause of many short and long-term health problems including cancer, autoimmune diseases and neurological conditions.

So next time you grab a juice make sure it’s organic. Ask questions! You deserve to know! Remember why you’re juicing in the first place..to be healthy, feel vibrant, move those toxins OUT! Let’s avoid things our body doesn’t need, and reward it with the highest quality organic foods. It’s not even a question.